The Solcast API is used by thousands of developers and organisations across five continents. These users frequently and without prompting tell us things like this: 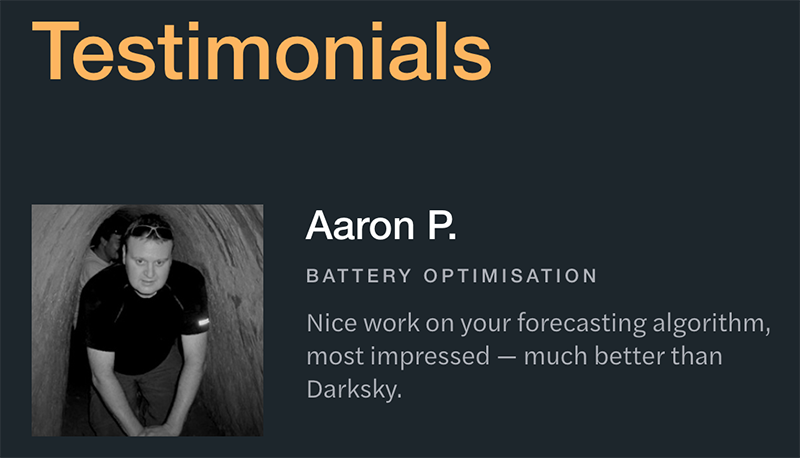 The above testimonial is from a battery optimisation developer and senior manager who did a direct comparison of the Solcast and DarkSky APIs.

Nice work on your forecasting algorithm, most impressed - much better than Darksky.

Why is the Solcast API so much better than Dark Sky?

The reason it's so much more accurate than DarkSky is principally that they operate a generic weather API, not a specialised solar API. More specifically, the Dark Sky hyperlocal/nowcasting technology is cool, but it is all about radar and precipitation (snow and rain). It is not focused on actual cloud tracking and prediction, like Solcast is.

This means that when it is raining Dark Sky may start to thicken the cloud data (which they only give as "Cloud Cover"), which does not actually consider the actual optical thickness of the clouds (which is what matters for solar). Furthermore, if it's not raining they are pretty much just giving you the vague and blurry cloud forecast that a coarse numerical weather model made yesterday / last night for today.

In contrast, Solcast is updating our cloud cover data every 5-15 minutes (and as soon as next week we start updating every 5 minutes over the US West Coast!). With each update, we are tracking every single cloud that's more than about 500 meters across and forecasting its movement 18 times (in our forecast ensembles) every 5 or 15 minutes to make a truly hyperlocal cloud forecast.

Solcast uses many thousands of surface measurements to improve our data

Unlike Dark Sky, Solcast actually uses ground measurements to (a) validate and (b) fine tune its forecasts!

In the below examples, we have real PV output (orange line) for two different large rooftop sites. In blue we have the Solcast "estimated actual" performance from those sites based only on our proprietary satellite cloud and radiation engine, and in white we have what Solcast was saying 1 hour ahead. You will never see anything like this performance from DarkSky since its a generic weather API. 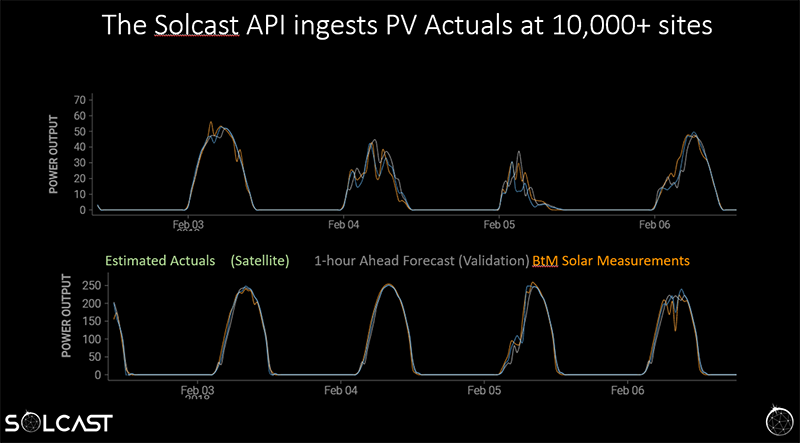 The fine-tuning is available in our API to account for site-specific PV issues like shading, orientation and other local effects.

Interested? Get some real cloud cover data through the Solcast API

We also offer our users the ability to access live, historical and forecast solar radiation and PV power data via our API within minutes of signing up. You can get started with a free trial by visiting our registration page!

James is a former operational meteorologist, and has worked as a senior manager in the weather industry. James has designed, built and operated real-time modelling systems for industrial applications, bringing key expertise to the deployment of our operational products and services.

James sees the integration of increasing solar and storage as a singularly critical technology challenge of the next 10 years.

Connect on LinkedIn.
Oops there was an error, please try reloading the page. Reload 🗙