At Solcast, we're crunching an incredible amount of weather satellite imagery every 5-15 minutes as we update our solar forecasting data and extend our historical datasets.

But what we've lacked to date were effective visualisations for how this process works, and what the data outputs look like. It is important to have a tangible outcome, particularly when the data is as elegant and intricate as global cloud cover conditions.

So our team dug into this challenge, and the outcome has become a highly valuable resource for our solar asset management and utility partners around the world. Each day, we are now uploading videos of yesterday's solar irradiance in motion, so that anyone around the globe can track the impact of cloud cover on their solar operations.

This tool has proven an excellent resource for the detective work involved on why/how solar energy generation sites, big, small and in-between, have performed on a given day! We hope it proves useful to you.

To further illustrate the power of this type of live solar irradiance map archive, let's look at a few real-world examples of how it can be utilised.

Do you ever catch yourself trying to answer - why did my solar system perform poorly on a given day? This is actually incredible common in the asset management space, and our experience has demonstrated that just a few days of intense cloud cover can throw-off an entire quarter of revenue estimates. But this attribution must be carefully managed, as owners and operators don't want to miss any important early signs of hardware issues. With the Solar Radiation Map tool, you can easily see a snapshot of the entire month of solar by region, and dig into particularly low generation days to make sure the culprit was in fact the clouds! 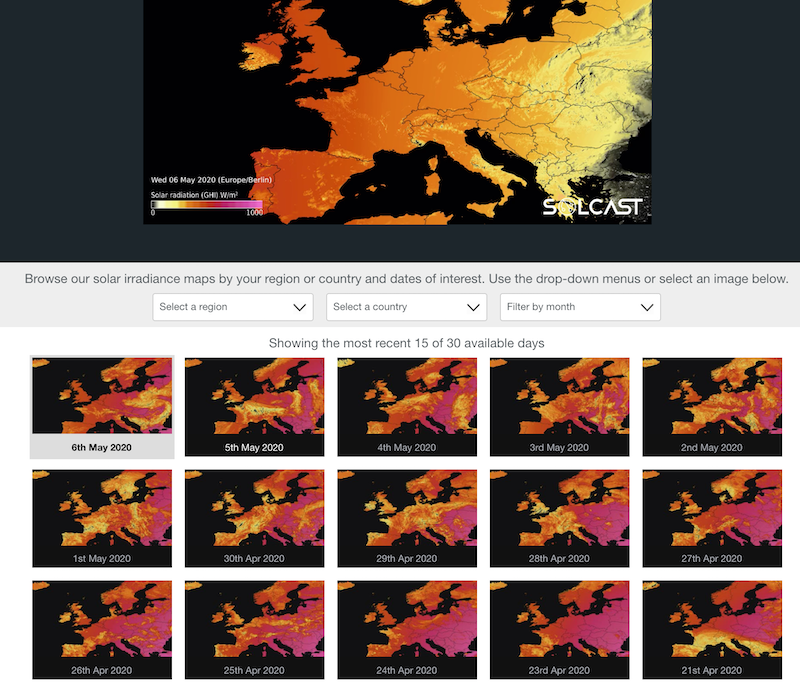 Behind the meter solar

Behind the meter solar creates many demand forecasting challenges, and is a growing source of trouble for utilities around the world. And while such generation assets can feel 'invisible' to the utility, the behaviour of behind the meter solar is primarily driven by cloud cover. Without including the impacts of cloud cover on the demand, they can quickly throw the proverbial wrench into your load forecasting engine!

So, for utilities experiencing unexplained variance in their demand forecasts, looking up a given day in the Solar Radiation Map archive, will quickly reveal the cloud cover conditions for a given day. Thick cloud cover over a high solar penetration region? Perhaps that is why the demand was unusually high. A quick clearing of cloud cover? You've found the source of that strong uptick in demand.

Severe storms in the United States

2020 has experienced a very early and active start to the spring severe storm season in North America. Severe weather impacts the electrical grid in many ways, including on solar generation. Our Solar Radiation Map archive makes it very easy to look up how a given storm outbreak impacts solar radiation. In this example from 24 March 2020, widespread #supercell activity drove solar radiation values down sharply!

Southeast Asia has been rapidly growing its installed solar capacity, particularly in Vietnam where >4.4GW of utility scale solar is now in operations. Vietnam, given its low latitudes and complicated geography, experiences routine and intense thunderstorm activity. The Solcast Solar Radiation Map tool allows for quick visualisation of the convective activity that frequently interrupts solar generation and can lead to disturbances in the transmission networks there.

We can also use the Solar Radiation Map tool to celebrate renewable energy milestones! For example, this past April, solar generation reached a new record of 9.68GW on 20 April 2020 in the United Kingdom. Sunshine was abundant, with only a speckling of cloud across the southwest.

Nick is an expert in the field of solar radiation and distributed solar PV modelling, and has co-founded Solcast out of a sincere desire to enable others to build the solar-powered future.

Connect on LinkedIn.
Connect on Twitter.
Oops there was an error, please try reloading the page. Reload 🗙