Solcast's historical solar irradiance database was released in 2019, with a mission to provide highly accurate, validated data to the solar development community.

Using a proprietary cloud detection and identification model, utilising the new fleet of third-generation geostationary satellites and refined over a four-year period, we’ve been able to produce the best performing solar database available. We’ve always thought developers should focus on planning and assessment, not wrestling with data, waiting days to sign up and receive pricing, and paying through the teeth for it. You shouldn’t have to work for your data, it should work for you.

The Vaisala / 3Tier database has been a widely-used meteo data source since its launch in 2009. The Vaisala database is generally perceived to have higher errors than Solcast, and similar costs. Compared to the Vaisala dataset, you can expect to find Solcast data more accurate, easier to obtain and trial, and a similar or cheaper price.

Both Solcast & Vaisala's models have been independently validated using multiple locations globally. Solcast's model has been compared with BSRN ground station measurements, available in the public domain. You can request a copy of our validation data, see accuracy and validation.

Vaisala offers 5 different algorithms for producing their data, based on a number of different clear sky models and cloud identification techniques. To be fair to Vaisala, we've used their most recent model, Vaisala 2.1, to compare accuracy with Solcast hourly mean values. A summary of Solcast's and Vaisala's hour GHI validation results are given below.

Understanding bias helps to understand a possible error of the long-term estimate. Bias variability and RMSE are important for estimating the accuracy of energy simulations and operational calculations. It is clear that the Solcast model decisively outperforms the Vaisala database in all metrics.

The Solcast model is symmetrically centred with an average bias error of zero, while the Vaisala model has a mean positive bias of 3.1%. The Solcast dataset shows significantly less variability, with a bias deviation less than half of Vaisala's. RMSE, a measure of the differences between the values predicted by the Solcast model and the values actually observed, shows stronger model performance. With much less variability in the dataset, developers can trust the accuracy of their energy simulations and operational calculations. 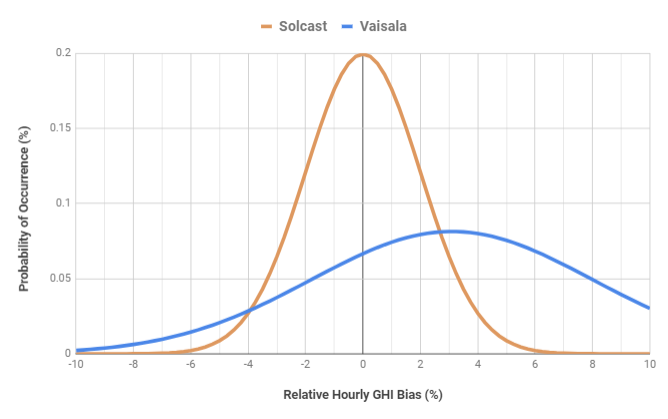 You can find more details on the Solcast dataset on the accuracy and validation page.

The Solcast model, having only recently been released, has not been as extensively validated as the Vaisala data. If you do your own validation, we'd love it if you can send us your results.

The Solcast methodology is semi-empirical and satellite-derived. We begin using validated, published models that offer excellent performance to build clear sky models. We combine this with the ‘secret sauce', our in-house methods for detecting and tracking clouds. This lets us model the amount and type of solar radiation reaching any particular 1-2 km2 grid cell. For more details see inputs and algorithms.

The Vaisala methodology is similar. It is semi-empirical and satellite-derived, relying on validated, published models to build a clear sky model, and uses a proprietary cloud detection model. The Vaisala cloud model has a lower resolution than the Solcast model, based around a 3 km2 grid.

Solcast only uses data from recent generation geostationary meteorological satellites (GMS). For this reason, we do not use data prior to 2007. Prior to this time, we find that too many of the GMS satellites have significant data quality problems including geolocation, poor temporal sampling frequency, and unreliable, bad or drifting data signatures. This ensures our entire database is based on data of the highest possible resolution, whilst still containing 12+ years of data history from which to understand the interannual variability. Users can be sure our accuracy and validation statistics apply to all our data, not just the most recent half of it.

We don't believe in using data from older satellites. With longer refresh rates and larger spatial resolutions, it's just not possible to produce bankable solar radiation assessments with the certainty demanded by the solar community. We're firm of the opinion that bad data in, bad data out.

Solcast and Vaisala both offer near-global coverage (latitudes higher than 60-70 degrees are not effectively covered by geostationary satellite images). Solcast offers data from as recent as last week. Data parameters available are shown below.

Solcast strives to make our data easy to use, immediately. Our data is usually available within 1 to 9 minutes of ordering. Our data is available in the following ready-to-import formats.

Solcast offers the best value for money and much lower risk for developers, operators and investors into solar power plants. Solcast is cheaper than Vaisala for evaluating just a single site and similar in price if your company conducts scores of assessments a year. We also offer the ability to purchase specific years of a time series, so you don't have to pay for what you don't need. See details on the Historical & TMY data pricing page.

The complete suite of irradiance and weather data required for effective monitoring, operation, and forecasting at your large-scale solar farm.
Learn more
Oops there was an error, please try reloading the page. Reload 🗙